Article cannot be published without adding a cover image and title.

Notes from a sketch artist's life 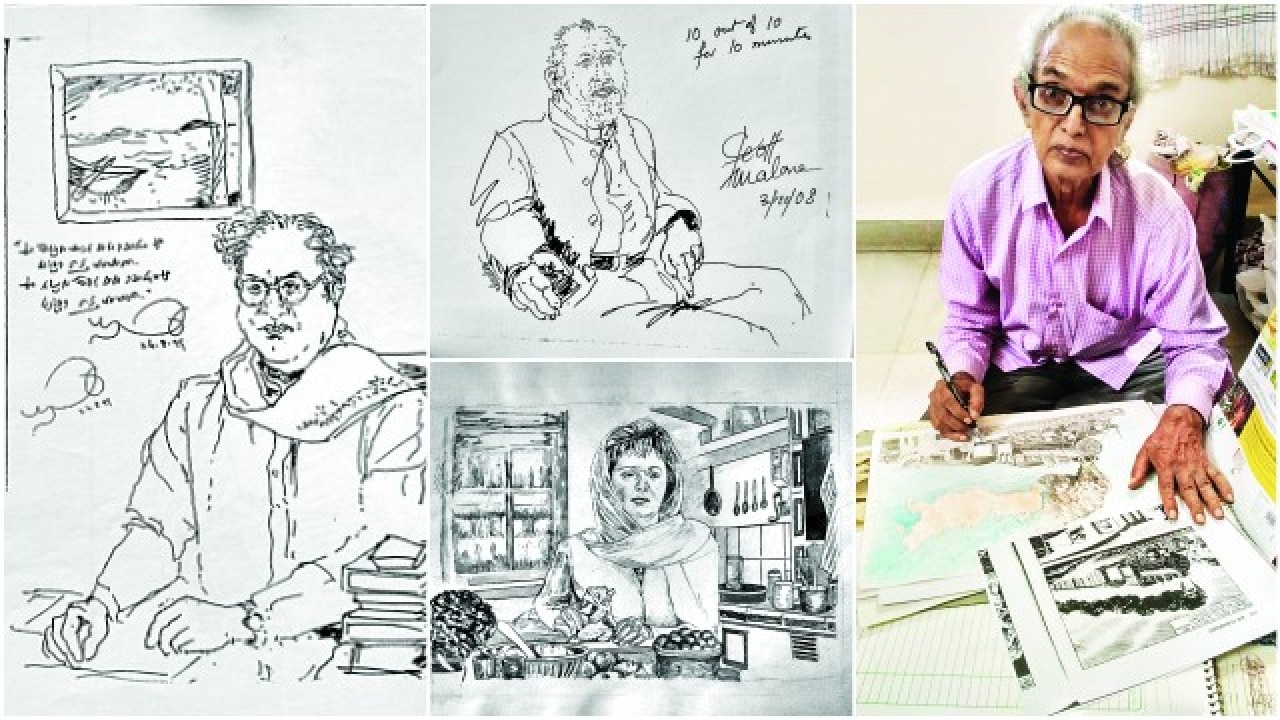 It won't be unfair to say that for Nagappa Dattatrey Adam, life really started when he was 55. From then on, he has spent the past 35 years persistently chasing 1,500 personalities from the field of sports, films and politics.

Though his appearance - wide eyes behind thick black frames, a high forehead, a wavy, grey mop and skinny built - completely masks this fervour of convincing his muse to sit still while he swiftly sketches a portrait in black ink - in less than 15 minutes!

Born to a Hindi-speaking family of padmashali weavers in Solapur, Maharashtra, as a child, he'd make portraits of his classmates for Re1, and spend the money to buy ground nuts. He had to drop out of school in the sixth grade when a financial crisis meant he had to help the family man their sari shop instead. Adam used the free time in between customers to practise his art. Life continued thus until in 1990, when at 55, he took a leap of faith and came to Mumbai to attend the first edition of Mumbai International Film Festival to see what it was to sketch celebrities. He has since continued to sketch jury members, festival directors and actors at MIFF, Asian Film Festival and the International Film Festival of India (IFFI), the 48th edition of which he plans to attend in Goa this October.

Adam maintains dozens of spiral bound books that contain his sketches of fluid lines, dashes and dots. Flip through his sketchbooks and you will find autographs juxtaposed with photographs of him sketching a celebrity and letters of gratitude from offices of international personalities. While he's sketched a few personalities from their photographs, a majority have been the result of direct encounters. Most personalities and celebrities reimburse him, paying him upto Rs5,000 for a sketch. "It's not to help my economic status, they say, but because my art touched their hearts," says Adam. Impressed by his work, some have invited him to tea, lunch, and occasionally beer.

Mother Teresa, who Adam sketched in 1995 at her Kolkata missionary centre, autographed his portrayal of her with wrinkles and gaunt eyes, with 'God Bless You'; MIFF 2008 jury member actor Geoff Malone signed '10 out of 10' and the 76th custodian of the Mewar Dynasty, Maharana Arvind Singh Mewar wrote, 'Excellent! Done in record time, thanks!'.

On what would've been Lord Mountbatten's 98th birthday, June 25, 1990, Adam sketched the last viceroy of India and his wife from a 1948 file photo, which showed them perched on the ground while attending Mahatma Gandhi's last rites at Rajghat in New Delhi. "I was very pleased to have it (the sketch) and to know that my father's birthday is still remembered in India," gushed the subjects' daughter, Patricia Knatchbull, on receiving Adam's work, in a letter from Kent, UK.

Adam, for whom sketching is his sole source of income, hopes to see his life's works turned into a book, but lacks funds. "I am everything because of my art, and am at most ease when I'm sketching."

Related Articles
Arts
Holiday Season; Here Are Some Unique Ideas For Christmas Decorations
Christmas is around the corner and if you have not already done up your house, here is a list of some unique ways to do it up.
By Sanju S

Are you tired of doing card-making and scrapbooking? Cheer up! We have a unique crafting idea for making wooden embellishments. You can use these embellishments in your own handmade cards, scrapbook pages, or art journals. Also, you can create wooden ornaments for your home or yourself using this method. You can create these adornments by using stamping techniques on wooden discs or any other wooden shape. For this, you can buy stamps for card-making from an online store at a great deal and also check out their latest promotions.

Materials Required - Wooden discs or wooden surfaces of any other shape, rubber stamps, and ink pads.

Which Stamp to Pick?

You can choose any rubber stamp of your choice, mounted or unmounted, keeping the size of the surface you want to stamp on in mind. If the stamp does not fit the wooden surface then the image will not look good and attractive. And also, you can use the same stamps as the ones you use for card-making to make an attractive and abstract image.

We have chosen wooden discs as they are ideal for stamping, you can use any other wooden shape of your choice if you like. Make sure to select the wood wisely as the porous surface of the untreated wood can cause the ink or colors to bleed through. It is also better to practice stamping on rough sheets or other unknown surfaces before stamping on wooden discs. After enough practice, take the stamps, add some dark color ink, and stamp it on the discs. If you see ink running through the grains of the wood, then paint the surface of the wood to seal the pores.

When you do this, put even pressure from all sides so that the image does not look smudged or blotchy. Also, you need to be very careful with your fingers while stamping to make sure that the disc does not slip. Afterward, leave the piece to dry for some time.

You can leave the stamped images on the wooden discs uncolored so that the wood is seen through. And if you want to color the image, then first check if the color bleeds or else, it will have a distorted and unfinished effect on the image. You can use color pencils or chalk to color as they are dry colors and won’t run through the grains. Seal the piece with a clear varnish to protect the image on wood.